You might be losing money without realizing it if you leave your electronics plugged in. Learn how you can save money on your power bill by making some simple changes.

Plugged In Electronics Do Use Energy

Some people think it doesn't matter if you unplug electronics when they're not in use. According to the Northeast Ohio Public Energy Council (NOPEC), electronics and appliances (especially those with digital displays) continue to draw power when they are plugged in. This is also referred to as a phantom load or vampire power. Things like cell phone chargers and rechargeable batteries won't stop drawing power as long as they are plugged in, so unplug them when not in use.

Devices That Use the Most Phantom Energy

While it's not practical to unplug every device or appliance in your home when not in use, there are some major culprits that you may want to consider unplugging. According to MarketWatch, some of the biggest energy vampires include

The Lawrence Berkeley National Library offers a complete power chart that breaks down the watt usage for dozens of common household electronics when on and off. The energy consumed when off varies widely, from night lights (using .05 watts) to set-top satellite DVR boxes (using over 28 watts).

There are also some commonly overlooked items that draw power when plugged in and turned off. Examples include tool chargers, treadmills, printers, fax machines, and battery chargers. 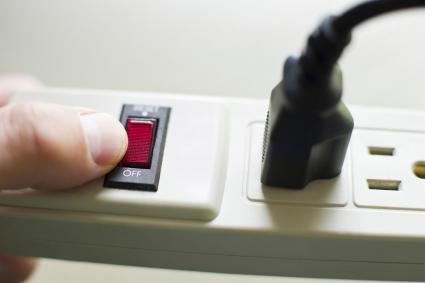 Consumer Reports reveals that the typical household wastes between five and ten percent of their energy costs on passive power drawn by electronic devices that are not in use. By unplugging devices and utilizing power strips to turn off appliance and electronic groups, you can conserve energy and expect to save up to several hundred dollars per year.

Experts agree that phantom power both consumes unnecessary energy and increases utility bills. Fortunately, there are several easy steps you can take to help the planet and keep energy costs down.

One way to tell exactly how much passive energy you're using and which devices are your worst culprits is to measure it using a simple plug-load monitor device. An example of this is the Kill A Watt electricity monitor (under $20 on Amazon). This can give you specific information that will help you decide which items to unplug.

For smaller electronics like chargers, simply unplugging them from the wall outlet when they are not in use can be a simple solution. Send yourself a reminder or put a post it note next to them to remind you until you establish a habit.

Experts recommend installing central power strips for your most commonly used electronics or groups of electronics. Energy.gov states that if you plug the devices into a power strip, then switch the power strip to the off position when you done using them, the power supply is cut off and the devices will not continue to draw power. This method can be easier and just as effective as unplugging individual devices.

If it would be impractical to unplug your computer because you use it so frequently, sleep mode can be a more practical option. Putting your computer in sleep mode helps to minimize energy use, even if the device stays plugged in. While it is still using some power, the amount is greatly reduced versus simply leaving the device fully on.

Older electronics may use more power, so an energy efficient upgrade is another option to reducing your energy costs. To get the most for your money, though, you should still unplug or attach energy efficient items to a power strip and shut it off when you're not using them.

Pull the Plug to Save

It doesn't take much time or effort to unplug appliances or install power strips that make it easy to shut off power to multiple devices. Use these simple tips to lower energy costs and consumption.