The TLC show Extreme Couponing profiles savvy shoppers who have learned to save a bundle through the effective use of coupons. These folks cut hundreds of dollars from their shopping budgets, and many end up with storage shelves and closets full of extra food and supplies. Amber and Clavon Flores have appeared on Extreme Couponing, and here they share some of their secrets to coupon success.

Amber and Clavon Flores have four young children, and became interested in extreme couponing after seeing the show in December 2010. They run the website Cut Clip Save, where they share tips and resources with others through articles and a community forum. They were kind enough to take some time to answer a few questions about couponing and their appearance in the show.

LoveToKnow Save (LTK): What is the difference between "couponing" and "extreme couponing"?

Amber Flores (AF): Couponing is more casual. For example, you'll find barbecue sauce on sale for a dollar, and with a $.50 coupon you'll get a pretty good deal. Extreme couponing is basically getting a lot for very little or even for free. You're able to buy large quantities for extremely low prices. It's almost like using Costco, but on a much bigger scale.

LTK: How much time do you spend on couponing?

Clavon Flores (CF): Always! We're always planning deals, where to find them, and how to get the best ones. We'll often take a whole day, spending four or five hours on planning and matching coupons to sales, then take two hours to actually go out and get our haul.

AF: It really depends. It can be a big trip or a small one. Sometimes we're just running out to get one or two things, and other times it can take 12 hours.

LTK: Clavon, couponing is widely perceived as something women are into. How involved are you in the whole process?

CF: I'm very involved! At first I was just sort of helping Amber, finding coupons and pointing out sales. Now I have my own coupon wallet and I find my own deals. I'm always looking for coupons now, I'll even pick them up off the floor at the grocery store!

CF: I think that would be the Nivea. It was on sale for $1.87 and I had $3 coupons. Since there was no limit on the number you could buy, I ended up with a huge overage that I was able to spend on pricier items and keep the total bill really low. There was a similar deal on Gain - same price, same coupon value - but there was a limit of four items per purchase.

LTK: When did you start your website, and what it your goal there?

AF: The main site has been running since May 2011, but we stared the community forum (which is linked from the main site) back in February. It's really a place where we can share what we've learned about couponing and saving money. There's a great community there in the forums and chat. It's cozy and interactive, with lots of people chatting and sharing info. It's a little like that show Cheers, with lots of regulars. They help the newbies out and post deals.

LTK: How do you respond to people who think you're doing something unethical, or that it's fake? 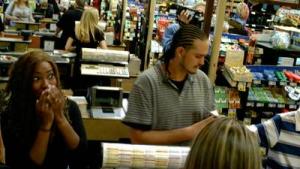 AF: Oh, we get that a lot! I'm sensitive to it and try to defend what we're doing. We've posted videos on YouTube to show how we do it all and that there's nothing fake about it. You don't have to do it on as big a scale to still get the savings! I try not to let it get to me, but it does.

CF: She does try to defend that it's not fake, but I just try to ignore it. People are going to say things, especially on the Internet. You can't let it get to you.

LTK: Where are the best places to find coupons?

AF: Online, definitely. There are so many, and we've listed tons of them on our website. Also eBay, clip services, newspapers, in-store - there are lots of different places. With the online coupons, the restrictions usually say that you can only print two, but if you have multiple computers you can print two from each one.

LTK: If you find great coupons for stuff you can't use, what do you do with them?

CF: We always have family or friends who can use these items. For example, I found a great deal on Poligrip. I have all my teeth, so I gave them away to senior family members. It's great when you can help your family out.

LTK: Is brand loyalty a thing of the past now for you?

AF: Most of the time, definitely. You can't be picky, but then when you get stuff on sale and then use coupons, you're getting name brand items. It's the brands that offer coupons. But there are some things that I will only buy in my favorite brand.

CF: It's hard to find coupons for store-brand or generic items, so with the coupons you're getting name brand items cheaper than the knock-offs anyway.

LTK: What was your experience like with TLC's Extreme Couponing?

CF: It was fun, it was a fun experience.

AF: I was surprised at how long it took to film the show, but it was really neat. It was fun to see how it all worked from a different perspective.

LTK: How have your friends and family reacted to all of this?

AF: They enjoy it! They come over and shop all the time.

CF: Even before the show people were interested in what we were doing. Follow the money, right? They came over to check it out, and we help them. We'll take family shopping with us, or help them find deals.