Imagine the willpower it takes to look at a simple, everyday purchase that you really want and then state, "No, I'm not buying it." No new shoes, not a single new book, not even an evening ice cream cone. These are the some of the many things Judith Levine and her partner did without for an entire year. The premise was simple: for one year, buy only essentials, no luxuries. Levine chronicled this adventure in Not Buying It: My Year Without Shopping with the hopes of finding the answers to what do we buy, and why?

Levine is New York-based author and editor. Her other books include:

LoveToKnow Save asked Levine how this project started, what she discovered about herself, and how consumers equate shopping with happiness.

Not Buying It: Judith Levine Interview

LoveToKnow (LTK): The idea for Not Buying It: My Year Without Shopping struck you after a mad shopping rush during the holidays. Some people still may be paying off credit card holiday charges even now. What is it about that time of year that pushes us beyond normal reason and spending limits?

Judith Levine (JL): On one hand, there's a sense of obligation that one is supposed to give. On the other, a feeling of generosity and pleasure, which welcomes the opportunity to give. This is nothing new; we can't just blame the "commercialization" of religious holidays. Since the beginnings of civilization, people have celebrated rituals of excess at holiday times, which have often also been times of worship: feasting, dancing, imbibing alcohol and drugs, sacrificing animals (or slaves, or virgins) - and extravagant gift-giving. 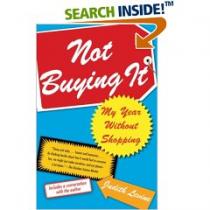 LTK: You went without items such as impulsive grocery purchases, wine, dinners out, new clothes and books, movies, and other forms of recreation. What new hobbies or pastimes did you discover in return?

JL: Most of what my partner, Paul, and I did that year was walk. We would get up from our desks at about 4:30, walk out the door in one direction or another and come back sometimes four hours later.

We also learned to cook cuisines we'd always gone to restaurants to eat, such as Thai and Vietnamese.

LTK: When you and your partner made the list of items to do without, what was the rationale for what you kept, and, in the end, were they worth it?

JL: We didn't make specific lists. We had a general principle: we'd buy necessities and go without luxuries.

LTK: What did you really miss the most during the experiment, and how do you look at buying that item now?

JL: I thought I'd long for things, but instead I longed for purchased experiences. Most of all I missed new movies and theatre. I also missed ice cream. These are not just entertainment, or, in the case of ice cream, pleasure. They are social experiences: knowing what's going on in the culture, talking to others about it, thinking, and having new thoughts and ideas stimulated. The ice cream, for me, is associated with going out after dinner on a hot summer night with my sweetie, getting a cone, and standing outside eating it and talking. Romantic.

LTK: What did you learn about the reasons why you spend the way you do, or how you shop?

JL: One feeling that I had more than I'd like to admit during the year was boredom. And it wasn't just that I, like others, sometimes go out to buy something (even something small like a mascara or a magazine) when I'm bored or just feeling vaguely dissatisfied.

The British psychoanalyst Adam Phillips calls boredom "the restless state of waiting to desire". Consumer culture gives us many ready names for our desire - Kate Spade handbag, Ben & Jerry's ice cream, Six Flags amusement park; millions of names! When you no longer can reach for those names for your dissatisfaction, you have to figure out what's really bugging you. Often, it's nothing in particular. You have to just live with that feeling, which often as not, passes. Just like the impulse to buy.

Do You Need It or Want It?

LTK: Many of us have so many "things" at our fingertips, we look at them as necessities. In your observation, does that seem to be the reason why it's so easy to spend instead of save, or have you uncovered other reasons?

JL: Research shows that almost everyone feels that she needs all the things she buys and doesn't have quite enough money to pay for everything she needs.

That's true for both rich people and poor. Lots of poor people don't have everything they need, but all of us in America buy plenty of things we could live without. How many times have you overheard someone saying (or said yourself), "I really need a pair of black shoes to wear with that dress"? It's easy to rationalize buying what we want by calling it a need.

On the other hand, if we realize it is only a felt need and not a material need, we may be more able to control those impulses.

On the third hand, to me, novelty, beauty, pleasure, and meaning - which we often get from purchased things - are human needs too. After all, we could all live on rice and wear sackcloth. To me, that would be a great step backwards!

LTK: You've said that you really didn't go into this project as a means by which to save money, but when you paid off your credit card balance of nearly $8,000 in only a year, how did that feel, and how do you approach saving now?

JL: Needless to say, it was great to pay off that debt. I haven't run it up again; I pay off my balance every month.

It's not so much that I have a different strategy for saving than I did before. Rather, I have a different attitude. I realize I can live happily on a lot less. So I'm less afraid of putting money in my IRA, which I can't touch until I'm 65. I know I'll be okay with less spending money. Since that year, I've also given away a lot more money to political causes and charity.

LTK: If the general populace were to incorporate into their own lives some of the techniques you write about in your book, how much of an impact would that have on an economic or social level?

JL: It might have an impact on our individual lives.

All that would be great for people's happiness, family lives, friendships, and health.

But for me, the main problem with over-consumption isn't personal, it's environmental. So much buying, resource-using, and throwing stuff away is using up our finite planet. To solve that big global problem, we need national policies and global treaties, like stringent fuel-emissions and anti-pollution standards, investment in energy efficiency and clean energy, compulsory recycling, and the like.

The ways we as individuals can have an effect is not as consumers, but as citizens - getting politically involved to push for those policies. If people weren't working and shopping all the time, they'd have plenty of time to get involved, whether at the community level, nationally, or internationally.