Two consecutive quarters of negative growth in the Gross Domestic Product (GDP) is the most common definition of a recession, according to The National Bureau of Economic Research. A broad range of economic factors come together to influence whether the GDP grows or contracts. Sometimes these factors come together to create a "perfect storm" for a robust economy or a recession.

The Main Five Causes of Recessions

The GDP is defined as the sum of four components: consumption, investment, government spending, and net exports (i.e. exports minus imports). Any one of these factors alone may not trigger a recession, but together they can -and do- spur recessions.

Spending may slow for a variety of reasons. People losing jobs, interest rates rising, or credit markets tightening are all factors that can lead to decreased spending.

During the Great Recession, Americans made substantial spending reductions, staying home more and going out less, changing their driving habits, and engaging in frugal shopping.

People not having adequate funds for investments can also contribute to a recession. Stock prices fall, retirement accounts shrink or stagnate, and savings dwindle, all of which shrink the GDP.

Lack of corporate investing also diminishes the GDP. Gerald Friedman, Professor of Economics at the University of Massachusetts-Amherst, believes that corporate profits outpacing investments contributed to the 2009 recession and continues to threaten the current recovery.

Government spending on things like Social Security, education, defense, infrastructure and more all contribute positively to the GDP. When tax bases shrink or government spending is reduced, recessions can result.

Imports continue to outpace exports resulting in a trade deficit of just over $46 billion as of June, 2018.

Though fear cannot be empirically figured into economic formulas, it absolutely impacts the GDP. When stock market values drop, investors sell off their holdings. When people believe their income may not be secure they make fewer purchases. Stores and companies that depend on consumers' business may be forced to close or reduce inventories. This can lead to reduced manufacturing, and snowball into job cuts.

Signs of a Recession

The data is the chart below clearly shows both the Great Recession as well as the 2011 dip. 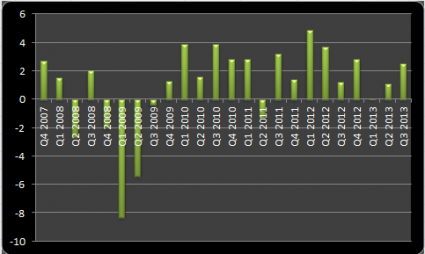 Preparing Yourself for a Recession

Instead of worrying over news reports about the state of the U.S. economy, consider taking steps to prepare yourself for a recession. For example:

Although the general public often uses the terms interchangeably, a recession is not the same thing as an economic depression. A depression is a severe recession, often defined by economists as a period in which the real GDP declines by more than 10 percent. Using this definition, the last depression in the United States was during the period from May 1937 to June 1938.

The factors that make up the GDP are interconnected, and they can work in unison to create wealth or conspire to take it away. Safeguard your finances as well as you can, and recognize that markets fluctuate. Some believe that recessions are a natural part of the capitalist economic system and help pave the way for periods of economic expansion.